Love poker? So do we. With the World Series of Poker now in full swing, we’ve been watching things go down and we’re stoked for the Main Event, which starts July 9th. If you can’t get enough poker, we’ve got tons of video poker options here at Palace of Chance. But we also know that you probably love to play live poker too. So today, we’re covering one fantastic table game called Caribbean Stud (or often, Caribbean Stud Poker).

It’s a great game that pits you against the dealer in a 5-card showdown, combining a fun element from Blackjack (more on that in a second), the familiar concept of raising, and so much more. If you’re not much of a poker fan, don’t worry. We have a feeling you’ll love this game as much as any other table game.

How to win at Caribbean Stud

If you’re familiar with 5 Card Stud, Texas Hold’em, or other 5-card poker games, you’re pretty much set to play Caribbean Stud. The game uses the same hand ranking system that you know and love. If you’re new to the hand ranking system, here’s a refresher, from best hand to worst hand:

Caribbean Stud is relatively easy to play and one of the fastest table games around, despite the fact that you’re essentially playing a hand of poker.

Begin by placing an ante bet. Keep in mind that if you decide you like your hand, you’ll need to raise twice the amount of your ante.

The dealer starts up by dealing you five cards, all face up. He’ll also deal one card face up to himself, followed by four cards face down. This is sort of like Blackjack in that you can see all your cards but only one of the dealer’s cards.

With your cards in mind and the dealer’s one card showing, you have to decide whether you want to fold or raise. If you fold, that’s it, you forfeit your ante bet and walk away from the hand. If the dealer reveals that they had a worse hand than you did, you won’t get paid because you’ve already walked away.

If you like your hand, it’s time to raise. By telling the dealer you want to raise, you’ll need to place double your initial ante bet. So, if you bet $10, you’ll need to put $20 in the raise bet for a total of $30 committed. If you win, you get paid on both bets.

Not every victory is considered a win

In Caribbean Stud, the dealer must have at least an Ace/King or anything better to qualify for the game. If the dealer does not qualify (let’s say by holding a Queen high), you’ll get paid on your Ante bet, but your raise bet will be returned to you.

That means if you have 3 of a Kind and the dealer has a 10 as his best card, you’ll only get paid on that original Ante bet. The reason that this rule exists is to increase the house edge so that the casino actually has a shot at making money.

Get paid out based on what you’ve got

In peer to peer poker, you have the luxury of raising and bluffing your opponents out of a hand. But that means there’s no reward for having a bigger hand. For example, you can win a $20 pot holding a Royal Flush or you could win a $1,200 pot holding a pair of Jacks. There’s no correlation between the hand you hold and the money you stand to make. It’s entirely up to you to get more money out of your opponents by getting them to contribute to the pot and either having a better hand or bluffing them out of the hand.

But in Caribbean Stud Poker, you get paid out based on what you’re holding. That means if you win with a Royal Flush, you’ll get paid out more than had you won with a 3 of a Kind. Casinos around the world pay out winning hands differently, but for a general idea, we’ve highlighted typical Caribbean Stud payouts below: 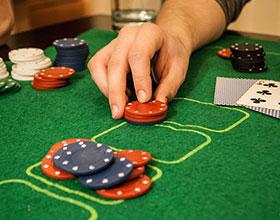 What does all this mean in a nutshell? It means that if you bet $10 you’ll win $2,000 if you hit a Royal Flush. For real. Of course, your odds of hitting a Royal Flush are insanely low, but considering you’ll net 3:1 payouts for a 3 of a Kind, which is fairly common, this game can end up being very lucrative.

Get inspired at Palace of Chance

At Palace of Chance, we don’t offer Caribbean Stud. But we do offer a number of other games to get you in the mood for poker. You’ll find several video poker variations that work a lot like Caribbean Stud. Only in Video Poker, instead of facing off the dealer, you’ll face off against yourself. That means as long as you’ve made the board—as long as your hand ranks on the chart and you qualify for a win—you’ll walk away with cash. There are several video poker variations, but most of them require to have a pair of Jacks or anything better to walk away with a win.

Ready to play? Sign up for a free Palace of Chance account and play your favorite games, including all the popular table games, a ridiculous number of slots, tons of video poker variations, and specialty games rarely offered anywhere else.

Remember, you can play free casino games with your Palace of Chance account, so feel free to keep your wallet away. We’re not bluffing.