Blackjack regulars and seasoned casino goers are usually at least vaguely familiar with the industry’s tricks to squeeze players for every last penny. It’s the reason that you’ll never see a window on a casino floor, and it’s the purpose for the conspicuous absence of clocks. When you’re inside the casino, figuring out the time of day is next to impossible, which is why you’ll regularly see zombified slots players who look like they haven’t take a break in two weeks. The basic casino design inherently includes features that make you want to ignore your inner clock and keep up the dance marathon with the one and only Lady Luck. 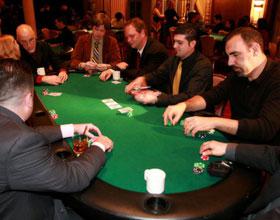 When it comes down to it, nothing about casinos can be considered an accident. For centuries, operators have reworked and refined the casino formula to maximize play time and stack up mountains of cash. Just take a moment to really soak in the constant dinging and visually-stimulating color schemes. Throw in a few free drinks and the possibility of landing a complementary offer or two, and players have ample reason to spend the entirety of a vacation within the comfortable confines of the gaming floor.

For every well-known and obvious trick employed by casino designers, there’s an equally effective, more subtle attempt to subliminally control the actions of gamers. Today’s topic is one such choice. At the vast majority of casinos, you’ll notice that every card table is lined with the same green felt. Much like a billiards table, this felt is seemingly ubiquitous, as if it was the last fabric on Earth when the table manufacturers were ready to throw into production. There is, however, a method to the madness. Green isn’t just the color of money (in the U.S., at least), it’s also a color that evokes feelings of calmness and relaxation. It’s all about color psychology.

A Crash Course in Color Psychology 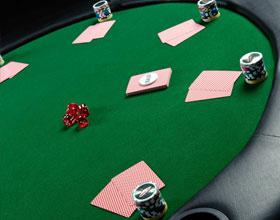 Colors play a major role in the way we interpret the world around us. From advertising campaigns to animals in the forest, we’re biologically programmed to associate certain colors with certain emotions. As proof of this concept, let’s do a little experiment. When you think of the word ‘angry’, what color first comes to mind? How about ‘rage’ or ‘aggression’? If you’re like most people, you may be seeing red. Red is a powerful color. According to studies, things with a red color appear closer than they actually are, jutting to the forefront of our attention in a somewhat demanding and aggressive way. Let’s calm down a bit. Think of something a bit more serene. A calm color that promotes a feeling of reflection. If you’re thinking blue, you’re not alone. Blue is the color most commonly associated with the mind, promoting clear thought and aiding with concentration.

Now that we’ve calmed down and centered ourselves, let’s get a little more upbeat. Think of a situation that’s fun, friendly and optimistic. The color most readily associated with lifted spirits and confidence is yellow. On the flipside, it’s also said that the wrong tone of yellow can cause self-esteem to plummet, giving rise to fear and anxiety.

When casinos were tasked with choosing a color for card tables, it’s now clear why these three weren’t selected. Rage, thoughtfulness and emotion are all qualities that can lead to an early ending at the casino. Instead, the industry needed a color of balance, harmony and reassurance. The color most associated with those traits is, of course, green. As the hue at the center of the spectrum, green is both easy on the eyes and naturally restoring to the mind. As a wanderer lost in the desert, seeing a lush, green patch of land would be both refreshing and reassuring. Those are the perfect feelings for playing more and more blackjack, right? 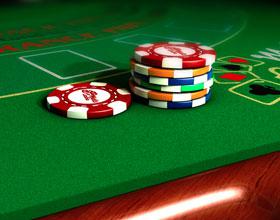 Beyond its psychological connotations, green is also associated with a number of promising details in western culture. From the traffic light, which uses the color green to instruct cars to move forward, to the almighty dollar, which features a green background that’s readily associated with wealth and prosperity, green card tables are like a non-stop barrage of positivity for your psyche. Any accountant will recognize that green on the balance sheet is a great thing, and, though Eastern cultures have deemed red as the color of prosperity and luck, the prevailing shade of success in the Western hemisphere is, without a doubt, the exact same as you’ll find on card tables around the world.

What about the Felt

Okay, so we’ve covered why the tables are green, but why are they covered in that weird felt? This is most likely a remnant from the days of illegal, underground gaming. Sure, the material, known in the business as baize, is great for sliding cards to players, but that’s just the first layer of this puzzle. Back in the day when gambling was much more widely restricted, bar-goers were forced to improvise in order to enjoy their favorite card games at high stakes. Since almost every bar featured a pool table, they were often used as makeshift card tables, with wagers and lines indicated using chalk on the green baize. In the event of a raid by law enforcement, players could quickly wipe away the chalk, leaving no real evidence of gambling having taken place. Much like the modern cocktail was born out of desperation due to substandard liquor during prohibition, necessity led to the invention of the modern card table.

When it comes to brain games, no industry is better suited to appeal to your subconscious mind than the casino industry. From the second you step foot in a casino, hundreds of years of refinement and meticulous design are working to keep you comfortable and excited to play for as long as possible. If the mind games get you down, Palace of Chance offers all of your favorite casino titles from the comforts of home. Check out our monthly promotions to get your gaming experience off to an extremely lucrative start!