If you consider yourself a regular at the slot bank, you’ve no doubt noticed the phrase ‘progressive jackpot’ a time or two. Right when you enter the casinos, huge video boards proudly announce jackpot totals reaching into the hundreds of thousands of dollars or more, enticing would-be gamblers to step up to the machines and attempt to win. If you take the time to watch, you’ll probably see that the totals on these boards are always on the rise. Little by little, they climb sky high, just waiting for a lucky gamer to land the right combination and take home all the cash. The term ‘progressive’ in progressive jackpot refers to just this, the reason that the total of the jackpot is always on the move. 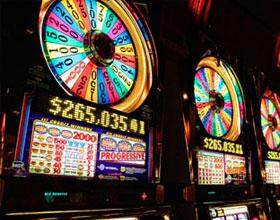 To boil it down to a simple explanation, progressive jackpots are jackpots whose values increase by a small amount with each passing game until someone wins. Instead of giving each machine its own jackpot with a relatively small grand prize, casinos tend to link multiple slots together in order to advertise a huge jackpot that rapidly and consistently grows. Huge prize totals motivate more players to play the games, and the jackpot continues to rise as a result. Eventually, someone wins, and the prize is reset. Knowing this, is there a way to take advantage of the nature of progressive jackpots? Is it possible to compute an effective play strategy based on the frequency of payoff versus the chances of hitting said payoff? Some in the gaming industry suggest that it is.

First things first, nearly all progressive jackpots require that a player bets the maximum number of coins or credits on the winning spin. Before you go cheap, consider the sinking feeling that you’d get in the pit of your stomach if you hit the winning combination, only to walk away with a few hundred bucks. Save yourself that heartache by finding a machine at which you can comfortably bet the maximum. With that out of the way, let’s consider how to find a machine that’s ready to pay. We all know that modern slots rely on a random number generator to determine wins and losses, making every single spin completely independent from previous spins. However, there’s more to this than meets the eye.

Eventually, progressive jackpots pass over a point known as the break-even point. The break-even point is significant, because it signals that a jackpot win could be imminent. Calculating the break-even point is no easy feat for slot machines. While you may be aware of the published pay table, there’s also unpublished information, such as the symbols on each reel, which will have an effect on winnings. From time to time, manufacturers may publish detailed payout information on their machines, so keep your eyes peeled. It’s pretty rare to find, though.

The House Edge and Advantage Play 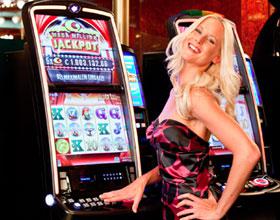 When you spin the reels of a slot and the progressive jackpot total ticks up, the origin of that provided cash is significant. Assume, for example, that you’re playing on a machine with a five percent house edge. The casino will set a predetermined amount of that expected profit to be contributed to the jackpot. If the casino’s feeling generous, you may see a one percent contribution. Now, offering 20 percent of their expected profit in the form of a big time prize may seem generous, but casinos also reap a few rewards. Remember those big LED displays we discussed earlier? The faster they increase the total, the more players are attracted to the machines. More players, more profit. It’s an economy of scale right on the gaming floor.

Sometimes, the size of progressive jackpots pass an imaginary line that makes the games to which they’re linked advantageous to players. In this somewhat unique situation, the vast majority of the jackpot sum has been contributed by other players, creating a total that’s worth effectively erases the house edge if played for a long enough duration. To boil it down, players have spent tons of cash increasing the progressive jackpot to a point at which it’s mathematically likely to pay out in the short term. Savvy gamblers have taken note of this rare occurrence, and the result has been organized teams of slot players that storm linked machines in order to monopolize the chances of a win. Some casinos ban the practice, but, in theory at least, it’s a can’t-miss opportunity to win big. The time it would take to lose enough cash to counteract the huge jackpot is large, and the odds of a jackpot win before that time passes are good.
While advantage play is a questionable strategy at brick and mortar casinos, it’s even worse when taken to the world of online gaming. Instead of a slot bank of 10 or 20 machines to cover, online casinos offer an effectively limitless number of duplicate machines, meaning that no group or team can cover every possible linked machine in order to corner the market on a jackpot win.

Other Games with Progressive Jackpots

We’ve focused quite a bit on slots, but they aren’t the only place you’ll find progressive jackpots. Video poker is a common choice, with the payout coming when a player receives a royal flush. Some poker games also offer progressives in the form of bad beat jackpots. To win the prize, players need to lose a hand with a sufficiently strong hand (often four-of-a-kind or better). Some online casinos also offer progressive versions of blackjack and roulette, but you won’t find those in your neighborhood casino.

Progressive jackpots are one of the reasons that slots are the most popular gaming option in casinos around the world. The idea of winning millions on a bet of just a few dollars is what gets most gamblers out of bed in the morning, and this idea is a real possibility when playing at a slot with a healthy progressive jackpot. Check out Palace of Chance for tons of slots offering progressive jackpots, and pursue the win of a lifetime!